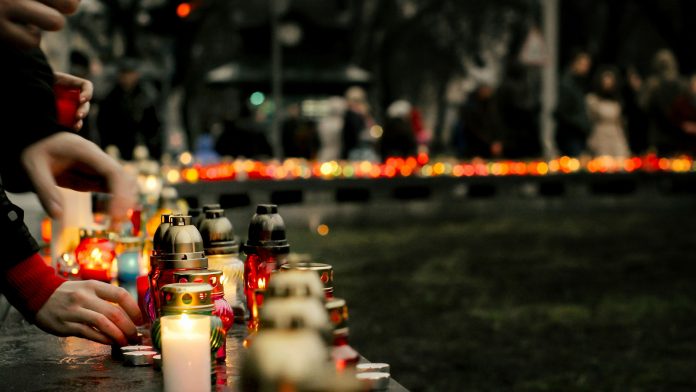 In December, the sixth edition of the Global Terrorism Index (GTI), which analyze 2017, was published. The report provides a comprehensive summary of key global trends and patterns of terrorism over the past 20 years, and GTI is being developed by the Institute for Economics and Peace (IEP) based on data from the Global Terrorism Database (GTD).  Data for GTD collect National Consortium for the Study of Terrorism and Responses to Terrorism from the University of Maryland. The key point of the report for 2017 is that a total number of deaths from terrorism has fallen by 27% and has declined for the third consecutive year. The main reasons are a fall in the intensity of the conflict in the Middle East, the decline of ISIL and increased anti-terrorism efforts. Furthermore, the number of terrorist attacks in 2017 decreased, which fell by 23%, but terrorism is still prevalent and represents a major global threat. Europe had the highest percentage improvement over last year, and with total deaths falling by 75%.

At the top of the list of countries with the highest number of terrorist attacks and the risk of terrorism, there was no change compared to 2016, meaning it is still the first in the list Iraq, followed by Afghanistan, Nigeria, Syria, Pakistan, and Somalia.

Europe was the region with the most pronounced improvement in the impact of terrorism and there has been a significant decline in terrorist activities, despite threats from returnees from foreign battlefields and online radicalization. The number of deaths from terrorism in Europe fell from 168 in 2016 to 81 in 2017. The most significant decline was recorded in Turkey, France, Belgium, and Germany, while the increase was recorded by Great Britain, Spain, Sweden, Finland, and Austria.

People with a criminal background especially susceptible to radicalization

Social alienation, lack of economic opportunities and involvement in external conflicts are major factors associated with terrorist activities in Western Europe, North America, and other economically developed regions. There is a growing body of evidence which indicates that people in Western Europe with a criminal background may be especially susceptible to alignment with extremist beliefs, radicalization, and possible recruitment by terrorist groups.

Most of the studies conducted in Western Europe find that more than 40 percent of foreign fighters and those arrested for terrorist activity have some form of criminal background. The threat of far-right political terrorism is on the rise, and there were 66 deaths from terrorism caused by far-right groups and individuals. The majority of attacks were carried out by lone actors with far-right, white nationalist, or anti-Muslim beliefs. Some estimates suggest that over 40,000 foreign fighters have joined ISIL in Syria and Iraq since the beginning of 2013.

On the Global Terrorism Index (GTI), Bosnia and Herzegovina (BiH) are ranked as 91st, out of 163 countries on the GTI list, where BiH is also among 94 countries that recorded improvements in the Index. Bosnia and Herzegovina is better placed for 12 places than last year’s list. Otherwise, the Global Terrorism Index is measured by the factors that influence the terrorist activities, and it is divided into 7 groups according to the level of risk to terrorism. Countries with high risk, high, medium, low, very low risk, and a group of countries in the group without influence, and at the end of a risk-free group, are at the highest risk of terrorism. The first high-risk group includes the already mentioned countries, which occupy the leading 6 positions on the GTI list. 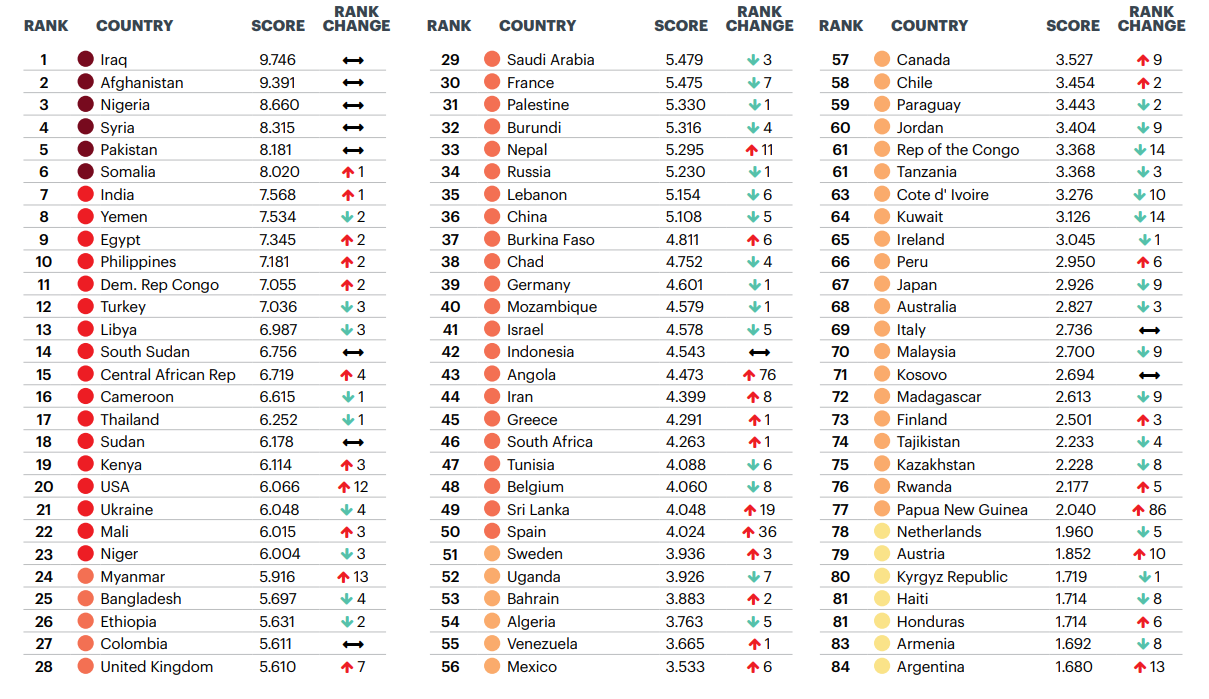 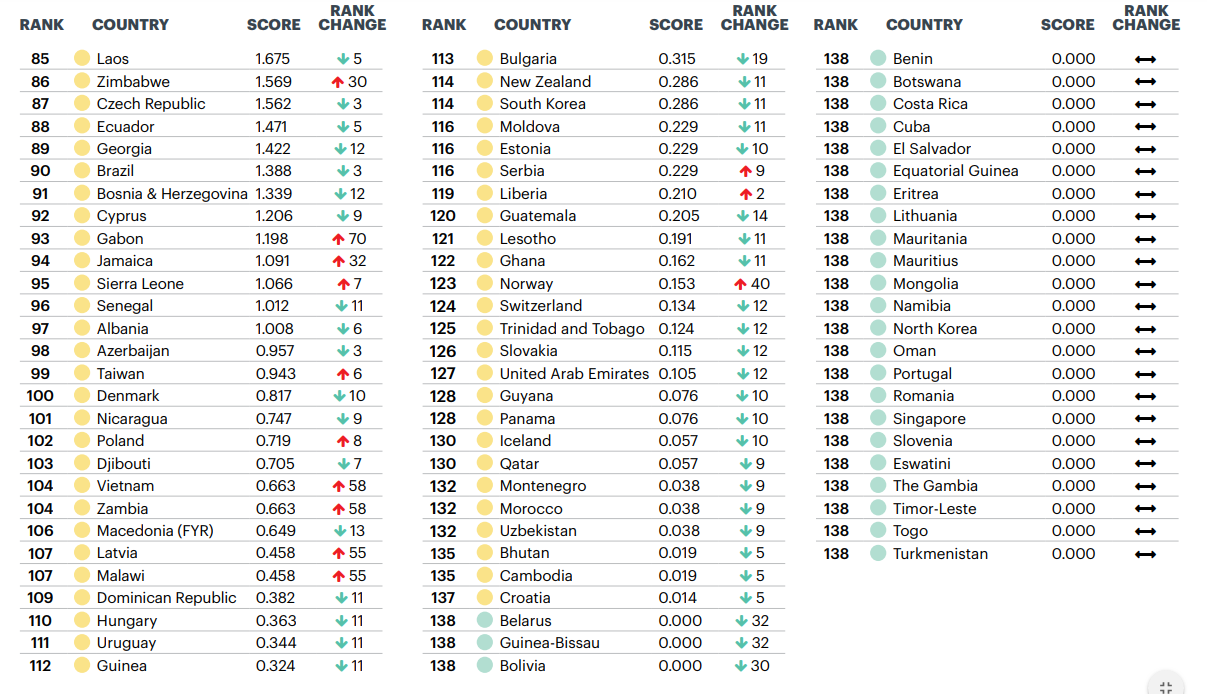 As can be seen from the presented tables, Bosnia and Herzegovina belongs to a group of countries with a very low level of risk of terrorism, and in that group of countries from the region there are more countries from the region, such as Croatia, Montenegro, Serbia and Macedonia, Kosovo; that belongs to a low-risk group, while Slovenia is the only one in the group without influence. All countries in the region recorded an improvement (which means a drop in the list) or maintained the same positions on the list, except for Serbia, which recorded a worsening on the list (growth for 9 places).

The aforementioned global reasons are also the main reasons for the improved outcome of Bosnia and Herzegovina (drop in the GTI list), and for this reason it should be noted that it has greatly helped the effective operation of Intelligence-Security Agency of Bosnia and Herzegovina (OSA-OBA BiH), State Investigation and Protection Agency (SIPA) and other competent security institutions. Also, the amendments of the Criminal Code of Bosnia and Herzegovina that enabled the sanctioning of accused persons for terrorist-related activities facilitated the work of judicial institutions. What needs to be further improved are systemic measures to prevent radicalization that can lead to violent actions, even to terrorist activities, and to make responsible state institutions more aware of who and in what way is dealing with terrorism-related issues. Because in recent years there has been the appearance of a large number of unprofessional persons who call themselves experts for terrorism, although they have no experience in dealing with security issues through the security, police or defense structures of the state responsible for dealing with terrorism issues. Due to the unprofessional activity of these self-proclaimed experts through projects implemented by some international organizations in BiH (in good faith), then through public statements and the presentation of unverified information and other data that are not based on scientific basis, the reputation of the state has been violated on several occasions and have been related negative connotations for the issues of terrorism in Bosnia and Herzegovina.

The list of Global Terrorism Index clearly showed that Bosnia and Herzegovina is in the same category of hazards and risks from terrorism, in which most countries in the region and even countries such as Netherlands, Austria, Czech Republic, Bulgaria, Denmark, Poland, Hungary, Estonia, Norway, Switzerland, Slovakia, Ireland, and some other countries. Then the question arises, on what basis Bosnia and Herzegovina in some international circles are being distinguished and persistently linked with terrorism much more than other countries. Even the leaders of some of the countries listed in their statements misinformed the public about the increased risk of terrorism in Bosnia and Herzegovina, although BiH is in the same or lower risk category of terrorism than their own countries.

Such negative campaign is significantly contributed by already mentioned self-proclaimed experts for terrorism, who for their own interest and wealth, groundlessly exaggerate the real danger of terrorism in BiH, thus allowing themselves uncontrolled earnings through consulting contracts with international organizations that implement projects for the prevention of violent extremism in Bosnia and Herzegovina. The aforementioned facts from the Index, as well as official information from the Council of Ministers BiH and the Ministry of Security of BiH on the situation in the field of terrorism, unambiguously indicate that those responsible in international organizations (primarily the IOM in BiH and OSCE Mission to BiH) review the current way of engaging experts and associates as consultants, to do so more transparently and obligatorily check the references and experience of the candidates before their engagement.

Although in 2017 there was a sharp fall in the number of deaths by terrorism in Europe, terrorist activity remains a significant security threat. Potential future sources of terrorism include foreign fighters returning to Europe after the collapse of ISIL in Iraq and Syria, as well as the danger of reviving the politically motivated extreme violence in Western Europe and North America. Some recent events have increased the fear of right-wing terrorism, so on October 27, 2018, anti-Semitic attacker, Robert Bowers killed 11 people in a synagogue in Pittsburgh, Pennsylvania. The former fireman had a criminal past, and his online profile showed the history of anti-Semitic radicalization. The deadliest year in North America in connection with the terrorist attacks of right-wing terrorists after 2002, was 2017, with 16 deaths in 31 incidents, and the deadliest armed attack on the Quebec mosque in January 2017 and resulted with six dead. The number of incidents in Western Europe is also on the rise, there were 20 attacks for 13 years until 2014, while in the past three years until 2017, 61 attacks of right-wing terrorists were recorded. 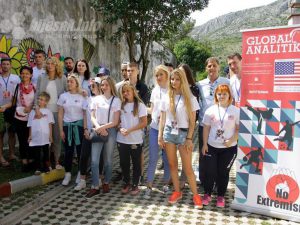 Center for social research Global Analitika with the support by the United States Embassy in Bosnia and Herzegovina, is implementing a project called NO... 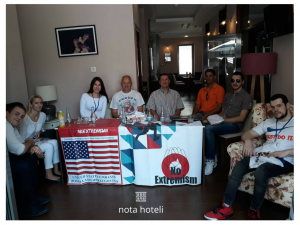 Global Analitika and Sports Ambassadors are saying NO TO EXTREMISM

Center for Social Research Global Analitika, as leading organization in Bosnia and Herzegovina for the multidisciplinary approach in prevention and countering...

Mesud Pezer: NO TO EXTREMISM – YES TO SPORTS!

The United States Embassy to Bosnia and Herzegovina has provided support for the project entitled NO EXTREMISM, which is being realized by Center for Social...