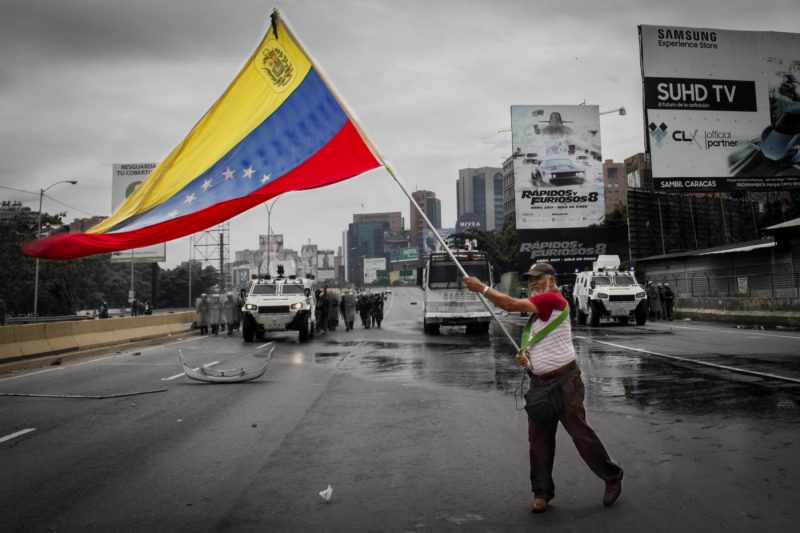 A short history of Venezuela

Since the time of the rule of the Spanish colonial administration, the Venezuelan people, led by Simon Bolivar, began their fight for freedom. In the Carabobo battle, 1821, the path to independence was opened, and the day of this great victory, June 24, is celebrated by Venezuela as a national holiday. The people of Venezuela was the first nation of Latin America that succeeded in the fight for freedom.

Throughout the 19th and 20th centuries, there was a narrative that Latin America was the backyard of the USA in which the United States acted in its own interests, by setting up various dictators, hunts and rich elites which preferred their own interests instead of state interests. According to a historian and publicist, Peter Calvocoressi, Latin America is synonymous with political instability at that time. In the 20th century, after the liberation of Cuba and taking over the power by Fidel Castro, some „new winds“ began to blow in Latin America, as well as 30 years since the death of the icon of all revolutionaries, Ernesto „Che“ Guevara, the revolution spread to Venezuela and gained its new face in the form of Hugo Rafael Chavez Frias, populist, lieutenant colonel of parachute units, that came to power in 1998. After coming to power, Chavez immediately implements extensive reforms of the political system, strengthens the social state with the main goal of improving the living conditions of the poorest layers of society. The biggest support was given by Venezuelan workers, peasants and most of the population, besides the rich elite which saw in him a person who would limit their influence on the governance of the state. He achieved great success in „fight“ for a better life standard of citizens, whose trust he enjoyed until his death on March 5, 2013. From his coming to power until his death, he reduced poverty in the country by 50 percent. It is believed that US and Western countries could not forgive him many „sins“, and largest was the establishment of good relations with Cuba and Iran, and also nationalization of energy and telecommunication companies.

Furthermore, the former president Hugo Chavez ordered via decree, the takeover of foreign oil companies, in the Orinoco river area, and the state takeover of majority ownership in the petroleum-oil companies that were property of: „British Petroleum“, „Exxon Mobil“, „Chevron Corporation“, „Conoco Phillips“, „Total S.A.“, „Strait“, etc., and the decree took over 60 percent of the ownership stake. Chavez helped the states of Latin America in examples of when Ecuador could not provide contracted oil deliveries, Venezuela lent the necessary quantities, but also when the Argentine fell into difficulties because it did not have enough money to pay the debt to IMF, Chavez helped with buying its state bonds. Hugo Chavez was at first considered, by American strategists, as a person who has no intellectual and strategic ability to manage the state, but quickly realized they had made a big mistake, a Strategic Institute of the US Army called him a wise competitor. He had the goal of making Venezuela the leading country of Latin America.

After the death of Hugo Chavez, as his successor, Nicolas Maduro, leader of syndicate, Minister of Foreign Affairs and Vice President, sworn „chavista“ and creator of the Chavez vision of the Venezuela for the 21st century, pledged to continue the Socialist Revolution in the 2013 elections, when he won with 50.8 percent of votes. He faced a serious crime problem, a high rate of murders and robberies, high inflation, lack of medicines, consumer goods, and increasing pressure reflected in financial and political sanctions of Washington. West has for a long time been supporting anti-government demonstrations, which mostly begin in rich parts of Caracas, cities of Merida and San Cristobal, as it was in 2014, and the demonstrators mostly belong to rich communities and middle class, and not to the wider poor population. The Venezuelan government then accused the United States of trying to bring down the democratically elected government. On the other hand, the West sees the situation so that the new authorities have usurped the assets of Western companies, also spreading the ideas of socialism and the fight against imperialism in South America,  that the human rights and principles of democracy are being violated and Venezuelan authorities are also accused of close ties with Russia.

Countries with the largest reserves of oil reserves in the world are shown in the picture above.

Oil is (again) a key reason for the crisis

Venezuela owns the world’s largest proven reserves of oil (about 300 billion barrels), and is one of the leading oil exporters, it is also less known that it is rich in gas and has the second largest gas reserves in the entire western hemisphere. The United States is the largest importer of Venezuelan oil, it is cheaper and more cost-effective to buy, mostly due to transport, as the transportation with tankers to the US lasts only 4 to 5 days, unlike Middle East oil that travels 45 days to the coasts of United States. Also, the Venezuelan government is explicit in the decision not to allow the United States to exploit their oil. The importance is also in the geostrategic position of Venezuela, which holds the gate of South America, and it is, therefore, the strategic interest of the United States not to allow another Cuba under Russian influence in it’s the immediate backyard. Maduro has further annoyed the United States, because of the resistance to the economic blockade, Venezuela began to express oil prices in Chinese currency, but also leaving the possibility of selling oil in other currencies. Such a decision of China makes it easier for Russia and Iran to charge their exports in dollars, thereby reducing the dollar’s dominance in the world market. Of course, in geopolitical games, the recent landing of Russian strategic bombers TU-160 at the airport in Caracas is also very significant, due to participation in a military exercise with the Venezuelan army, which sought to strengthen the power of president Nicolas Maduro, but also to show the rising power of Russia and it’s warning for installation of US anti-missile shield in Europe.

Current events and the role of the Venezuelan army

By the decision of the Venezuelan People’s Assembly, under the leadership of the opposition to declare President Nicolas Maduro illegitimate and for the president temporarily appoint the President of the Assembly Juan Guaido, it complicated the already complex situation. This unexpected act followed when Maduro seemed to be stronger than ever because neither the sanctions nor the previous attempts to destabilize his authority failed. The rush of the US and the West to resolve the situation is obvious, mostly because Venezuela showed in the past years the possibility of economic development that is not based on capitalism. An attempt to gain the support of the army for setting up and recognizing Juan Guaido for a legitimate president, who was not elected in the elections, failed, and judging by previous events, the army explicitly refused that possibility. The National Bolivarian Armed Forces of Venezuela are not the largest armed force in Latin America but are among the best equipped. In its composition has mostly Russian weapons, although they also bought weapons from other countries, primarily China and Belarus, it owns 192 T-72B1V and 84 French AMX-30 tanks. Also, they own 130 armored combat vehicles BMP-3M and 114 BTR-80A, air forces are the crown of the Venezuelan army, where they own 23 Russian fighter aircrafts SU-30MK2V and 19 American F-16A. The Venezuelan air forces also have 10 modern attack helicopters Mil Mi-35M2, 16 multirole Mil Mi-17-V5, 3 heavy transport helicopters Mil Mi-26T and 40 Bell helicopters. Their artillery forces are well equipped with 50 self-propelled howitzers 2S19 Msta-S, 12 multiple rocket launchers BM-30 Smerch and 24 MRL BM-21 Grad. The biggest challenge and concern of Washington are anti-aircraft systems, 12 batteries of famous system S-300 VM, 24 S-125 Pechora-2M, 7 BUK-M2, and TOR M1 systems. 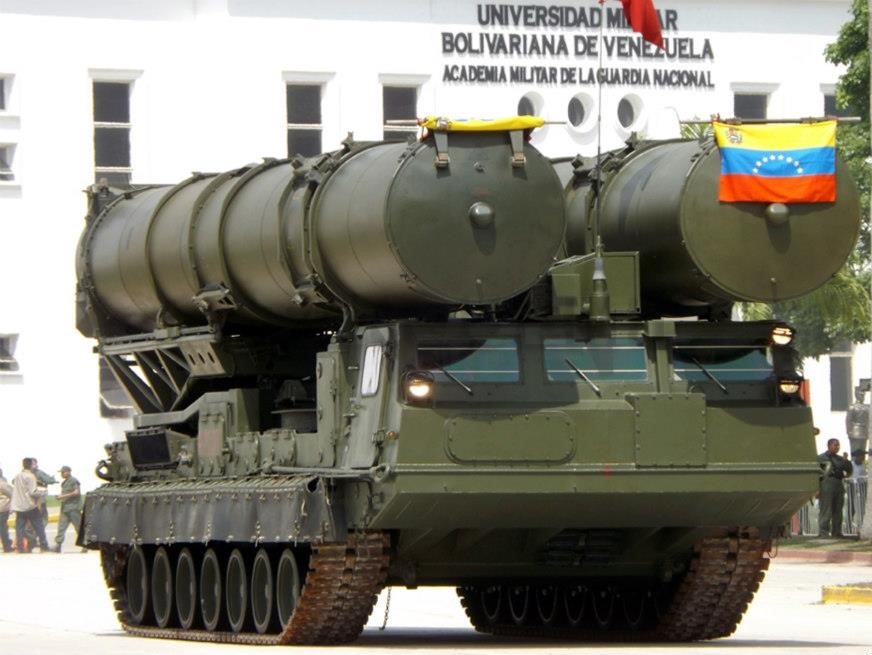 The anti-aircraft system S-300, a powerful asset in possession of the Venezuelan army

From the illustrated war power of Venezuela, the immediate possibility of direct military intervention of Washington is not certain, and the idea of the possibility of repeating the Lybian and Syrian scenario, on the Venezuelan soil,  is most represented at the moment. Neither, an attempt to break the unity of the Venezuelan army is not excluded, nor the sending of armed groups from Colombia, and both countries are already sending troops towards the border. Judging by the unity that is currently showed by the people of Venezuela together with the armed forces, and with the support of their allies, Russia and China (with which Venezuela has signed military and bilateral agreements), this scenario is possible, but it’s difficult to succeed. According to this scenario, the Russian experience in Syria would play a crucial role, and the media are already transmitting information, that parts of the Russian private company „Vagner“, have been deployed or set off for Venezuela. The „Vagner“ is just one branch of a Russian GRU, that has long been conducting operations in the Middle East. Russia’s problem is the pretty big distance from South America, and the question is how much Russia is determined to preserve Nicolas Maduro in power and whether it’s ready for such a complex undertaking before the doorstep of United States. The last such venture was in 1962, in the case of the Cuban crisis and brought the world to the brink of a nuclear war. These days, President Maduro ordered an additional enlargement of National Bolivarian Militia of Venezuela up to 2 million men, and together with the armed and police forces, will preserve the sovereignty of Venezuela. President Maduro has already ordered the end of all diplomatic ties with the United States and has also received great support from other states as the: Turkey, Iran, Cuba, Bolivia, Nicaragua, and Mexico. He received direct support from Turkish President Recep Tayyip Erdogan, who called him brother, which is significant because of Turkish membership in NATO, also the emerging changes in the world geopolitics and the complexity of redefining the new world map of interests, providing an ever-increasing resistance to the unipolar concept of the United States, which drives Washington to increasingly aggressive reactions on the geopolitical map of the world. According to all estimates, in the case of an attack, Venezuela will defend itself and provide resistance, because they believe 30 years have been invested in creating this Venezuela, and the people with their history of revolutionary action, behind which is the embodied myth of freedom and independence in the icons of this South American state, Simon Bolivar and Hugo Chavez.

If an intervention occurs or the Lybian and Syrian scenarios are repeated, or if the United States and its allies in the region take an open intervention against Venezuela, the world will get another hotspot that will take the entire planet into one spiral of uncertainty beyond which the final outcome is not known; nor can it be easily predicted? 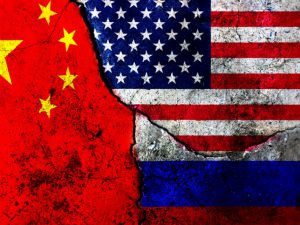 Restoring geostrategic and military games in the Western Balkans

Additional arming of Serbia and Croatia in recent months is once again a matter of public interest, on the one hand, it causes concern of peace activists in... 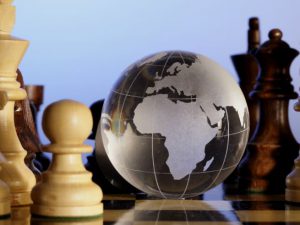 It is evident that the world has entered into a new geopolitical phase, which is more and more uncertain, and so far in history, there were never more... 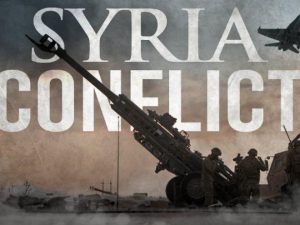 The military situation in Syria has been much simpler in recent months, than it was last year, although there have been some significant changes in the...